Главная » ipad, андроид, софт » With One New App, Every Sina Weibo Post Can Be Easily Translated into English

With One New App, Every Sina Weibo Post Can Be Easily Translated into English

A couple of months ago we previewed the creation of a new kind of third-party app for Sina Weibo – one that would translate the mostly Chinese content posted to the service into English. That would make the lively, Twitter-esque Weibo a lot more accessible to people who can’t speak Chinese. Well, today that app, called Surround App, has actually launched, so we can finally test it out.

Surround App is free and allows one-click machine translation of any Weibo post from someone you follow. In addition, it gives you a full English UI for the most common Weibo functions, like making retweets and comments. The Hong Kong startup admits that many features are omitted in this beta, with things like translation of comments, slang translation, image uploading, and paid-for human translations all coming at a later date. Here’s the current beta that I’ve been playing with: 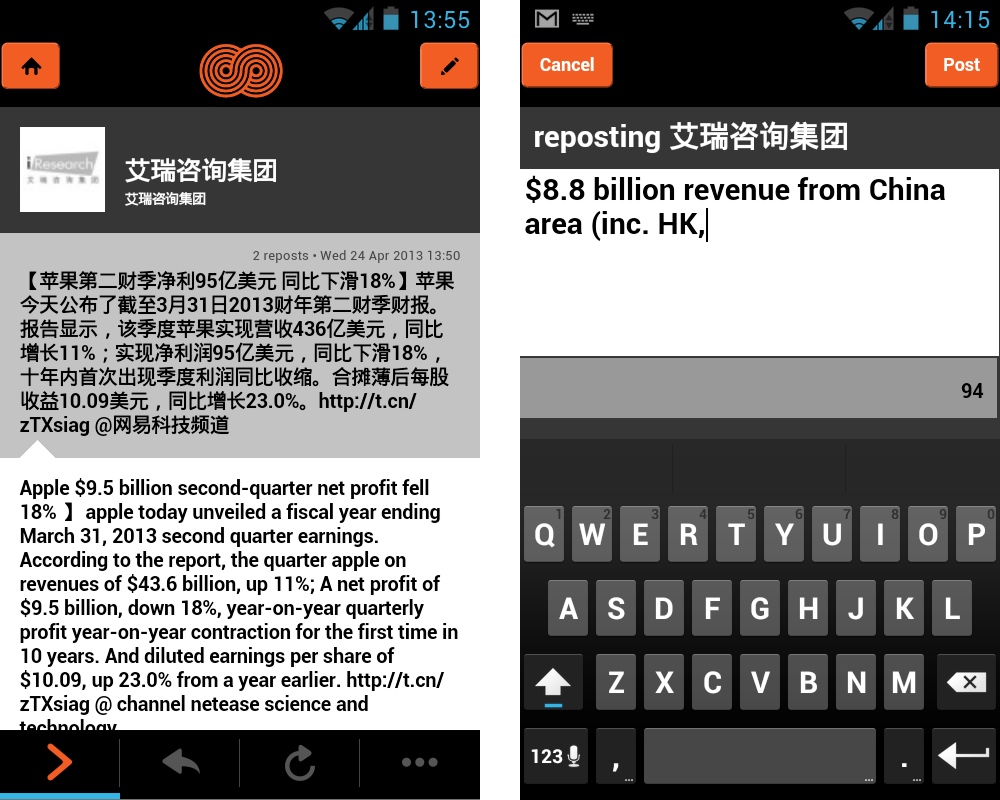 There are a few confusing aspects to the new beta. What looks like the retweet/repost button (pictured above) is actually for comments, and what’s apparently a refresh icon actually serves to repost the content. It’s not made very clear how to activate the translation – it turns out you need to hit that arrow button in the bottom-left of the app. Hopefully the icons will be rethought. If it sounds like I’m being too tough on a free app, that’s just because I’m keen for it to be good as it could prove so useful for many people.

Co-founder Jeffrey Broer previously told my colleague that the concept was born of his own frustration at not being able to understand “all these fascinating people online that I want to follow”. The team has received about US$15,000 in seed funding, plus office space and technical guidance, from HK Accelerator.

Surround App is now in Google Play for Android users, but the iPhone version hasn’t yet shown up in iTunes.