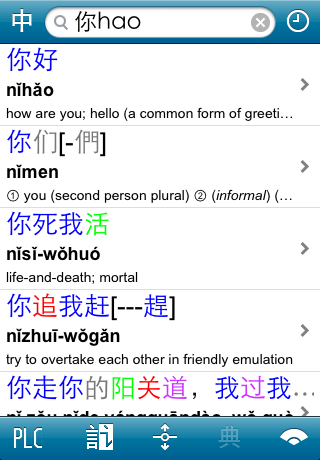 So it’s been about a year since my last update email and it seems like it’s high time for another one — a few actual announcements plus a status update on our (extremely delayed) next big iOS update and some other things.

While our big iOS update isn’t quite ready yet (see below), we have released a few of our upcoming dictionaries ahead of schedule. Specifically:

Many more new dictionaries are coming, but we had these couple ready to go now, and most of them also had significant numbers of users and/or very insistent publishers compelling us to hurry up and release them ASAP.

Anyway, you can buy / download all of these new dictionaries right now via the in-app «Add-ons» tab. They’re all available on Android as well as on iOS (though the Oxford has already been out on Android for a little while). We’ve also issued updated versions of the 21st Century / NWP / ABC E-C dictionaries on iOS (much cleaner formatting, especially in the first two) which you can get from the Updates tab in Add-ons.

We’ve also released an experimental version of the built-in PLC dictionary with support for displaying Cantonese (Jyutping romanized) in every entry — you can download that from this forum post (bit tricky to install, unfortunately). Many other Cantonese-related improvements are in the works.

Along with these releases, we have now ceased offering our «Complete» bundle on iOS; in order to keep it «complete» we would have had to raise the price to something like $200 (and even more than that after our next batch of dictionary launches), and as our lineup gets more diverse it becomes increasingly difficult to justify selling them all together — the number of users who’d be interested in both the beginner-oriented Tuttle Learner’s Dictionary and in a dictionary of Classical Chinese is vanishingly small.

We released a pretty significant app update on Android about three weeks ago (with Holo theme support and some cool new dictionary search features, among other things) — if you haven’t downloaded it yet, you can get it from the «My Apps» screen in Google Play, or if you downloaded Pleco directly from our website type «pleco.com/getandroid» in your device’s web browser to get the latest version. Since Pleco’s permissions have changed in this update, it won’t install automatically — you’ll have to go in and manually approve the update in Google Play.

As far as the status of our Android software in general: sales have been a bit less than we might have hoped — strong enough to justify having developed it, but still lagging well behind iOS (running steady at about 25% of our total sales = 1/3 the sales we’re getting on iOS). But in all other respects it’s been a great success; download numbers have been huge, often exceeding those on iOS, and in the last few months especially we’ve also seen noticeable improvements in our iOS download numbers and sales, suggesting that greater awareness of our product from Android may actually be feeding back into our iOS business (backed up by a good deal of anecdotal evidence to that effect).

Around this time last year I suggested that we were hoping to have our next big iOS update finally out sometime that spring, which clearly didn’t come anywhere close to happening; while we have released some minor updates since then (including a pretty nice upgrade to the handwriting recognizer), iOS users have now gone almost 2 full years without a major upgrade.

This is clearly an unacceptable situation, and one about which I am truly sorry — there are a whole bunch of reasons for the delay, and aside from apologizing, about all I can do is identify some of those reasons, tell you how we plan to prevent this from happening again in the future, and give you as much information as I can about the current status of the update.

Another hugely-delayed item from last year is our revamped website: it’s still not quite ready yet, but it should go live in the next few weeks, with a vastly simplified online store (enter your Registration ID if you have one, check boxes for the items you’d like to purchase, fill in your billing details and click Buy) headlining the list of improvements. We’ve already started to roll out a few little improvements, like the new mail system that I’m using to send out this announcement email.

Maybe not of interest to most of you, but we’ve had a number of inquiries recently about institutional sales of Pleco through Apple’s volume and educational purchasing programs. Right now, it’s not possible to buy Pleco through those programs, since we sell our software only in the form of in-app purchases and those programs don’t support them, and at the same time we’re not permitted to sell our iOS software outside of Apple’s store, so if a school contacts us wanting to buy a dozen copies of Pleco for their student iPads there isn’t really anything we can do for them.

To solve this problem, we’re developing a standalone Pleco app with all of our non-dictionary add-ons (including OCR) but no dictionaries. Apple’s rules do permit us to sell electronic books outside of their system, just not any other software features, so schools can buy that app through Apple and then contact us directly to buy any additional dictionaries they want. This way, we can offer volume buyers most of the flexibility of our current in-app purchasing system (get exactly the dictionaries they want, upgrade later, etc) in spite of their inability to make in-app purchases.

We realize this might also be useful for individual users who for whatever reason can’t make in-app purchases on their phone but can purchase regular paid apps, or who’d like an easy way to give a copy of Pleco to somebody as a gift (also not possible with Apple’s in-app purchase system), or who’d simply prefer not to give Apple a 30% cut when they spend $100 on some new dictionaries. So we also plan to list this standalone app in the regular App Store, and to launch a new online store on our website allowing you to buy add-on dictionaries (but not anything else) for our iOS software.

I’ve included this statement about some platform or other in pretty much every one of these emails I’ve ever written, but anyway:

We have no current plans to support Windows Phone 8.

Programming-wise, while it might seem like this is a natural / logical / easy port from our old Windows Mobile software, it’s actually not — the two OSes have very little in common and it would not be noticeably easier to port to Windows Phone 8 than to any other mobile platform. So it boils down to a business question, and the business simply isn’t there yet — it might be there in a year or two, but right now there just aren’t enough people using Windows Phone 8 to cover the cost of porting to it, and we’re not confident yet that there ever will be. And since we’ve managed to achieve great success on both iOS and Android in spite of our competitors on each of them having a 2-year head start, the benefits of getting in early don’t really seem great enough to offset the risk that Windows Phone 8 will fail.

There’s also the usual list of reasons why we don’t like porting, of course, one of which, the fact that it takes time / energy away from our other products, has just been demonstrated again by the past year’s experience with the big iOS update; the last thing our (wonderfully patient) iOS customers want is for us to put major development on hold yet again to make a WP8 app, and now we’ve got a large and growing group of Android customers who would similarly prefer that we focus on that platform and not ignore it in favor of Windows.

So with such a long list of improvements we’d like to make on iOS and Android, and so many customers on those two platforms eager for those improvements, it just doesn’t make sense to throw a whole bunch of resources at a new and as-yet-unproven mobile platform.

This has been getting a lot of buzz recently and actually looks pretty promising — in fact I’d rate its prospects as slightly better than Windows Phone’s — but again, it’s far too soon to tell whether it’ll be successful enough for us to support it. The much-touted ability of BlackBerry 10 to run Android apps would not help in our case, since our app uses a lot of native code (not currently supported by their system), but overall it seems likely to be of comparable difficulty to a Windows Phone port.

Desktop software is in a very weird place right now, poised on the verge of convergence with mobile but not quite ready to do that yet. Our hope / expectation is that in one of the next two Mac OS releases, Apple will at last bring the already-very-similar iOS and Mac OS X together in full, with the same apps now running on both systems with the same code; they’ve already been moving in that direction for a few years now and we see few barriers remaining before they’ll actually be able to deploy it. Assuming that does happen, we’ll probably make a quick-and-dirty port of our iPad app available for desktop Macs almost immediately, and follow up with more desktop-specific UI improvements depending on how well that sells.

Thanks as always for your continuing support / feedback / complaints / bug reports / word-of-mouth / 5-star reviews; as always, any of that that you’d like to send to us can be directed to me atmikelove@pleco.com.