These Diagrams Reveal How To Negotiate With People Around The World 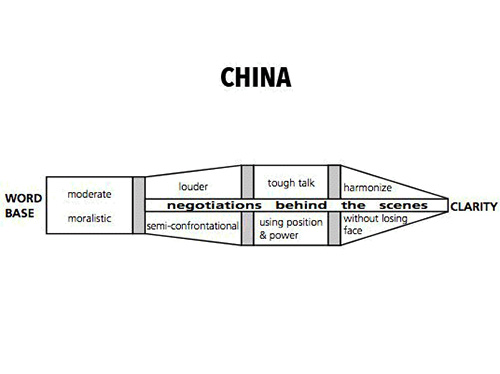 You can’t expect negotiations with French to be like negotations with Americans, and the same holds true for cultures around the world.

British linguist Richard D. Lewis charted communication patterns as well as leadership styles and cultural identities in his book, «When Cultures Collide,» now in a 2005 third edition. His organization offers classes in cross-cultural communication for big clients ranging from Unilever to BMW.

In support of cultural studies, he writes: «By focusing on the cultural roots of national behavior, both in society and business, we can foresee and calculate with a surprising degree of accuracy how others will react to our plans for them, and we can make certain assumptions as to how they will approach us. A working knowledge of the basic traits of other cultures (as well as our own) will minimize unpleasant surprises (culture shock), give us insights in advance, and enable us to interact successfully with nationalities with whom we previously had difficulty.»

Although cultural generalizations can be overly reductive, Lewis, who speaks ten languages, insists it can be done fairly, writing: «Determining national characteristics is treading a minefield of inaccurate assessment and surprising exception. There is, however, such a thing as a national norm.»

When meeting with French, be prepared for a vigorous logical debate.

When meeting with Americans, expect them to lay all their cards on the table, get upset when there’s a disagreement, and resolve as fast as possible with one or both sides making concessions.

We’ll go over the rest in brief after a selection of communication charts taken with permission from «When Cultures Collide.» Below, conversational range is shown with increasing width, obstacles are marked in gray, and cultural traits are noted as well.